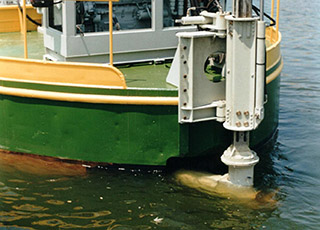 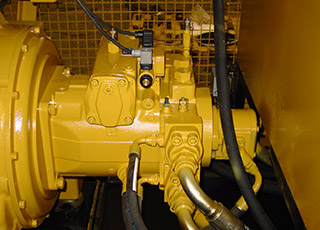 At the beginning of seventies, our designers made a prototype of a new propulsion system, based on hydraulic principles. The system was patented in 1979; it applies to the propulsion and also to the maneuver propellers. The propulsion units combine the “off- board” manageability with power up to 1000 HP. Like classical engines employed for pleasure boats, they feature forward and reverse gear, the possibility to fold the vertical column for inspection and replacement of the propellers - no need to neither enter the dock nor haul up the boat.

The propeller-rudder can turn from 70 to 360 degrees, depending on current production models. The propulsion units are commanded by joysticks which act proportionally on the propeller rotation direction (forward /reverse), on rudder rotation and on engine revolutions. An appropriate ration of valves protects the diesel engine and the hydraulic unit from accidental block up of propeller caused by rocks, tree logs or low beds. By using the variable capacity pumps, the diesel engines revolutions regime can be regulated in a most appropriate way for the navigation and the speed can be varied just acting on oil flow at pump level.

The hydraulic pump can be connected to diesel or electrical engines and can be positioned far from the propulsion units. A series of rigid and flexible piping will complete the connections.

The controls can be made available also on the propulsion column- this is useful and safe for maintenance operations. On demand, a portable remote control is delivered. It can be connected to a special socket and can be transported to different locations in order to facilitate the maneuver operations. A dedicated system allows to increase or decrease the immersion of the propeller (also during the navigation); thus to make a better push or be on safe side in case of low beds. On board, besides the command joystick, the groups of alarms, level sensor and propeller immersion level indicator are placed.

Costruzioni Navali realized more than 400 propulsion groups for Italian and foreign market. Thanks to their reliability and simplicity of usage, they are widely appreciated on any ship type and for any power range. All propulsions units and bow thrusters currently in production can be delivered with RINA tests.

The Company builds different types of landing propellers. Some models are in extraction cages allowing maintenance operations while floating. 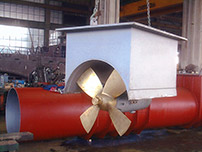 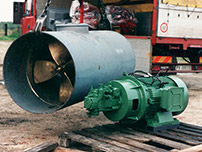 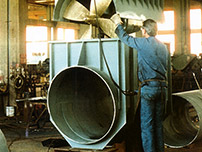