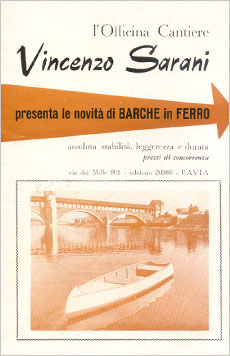 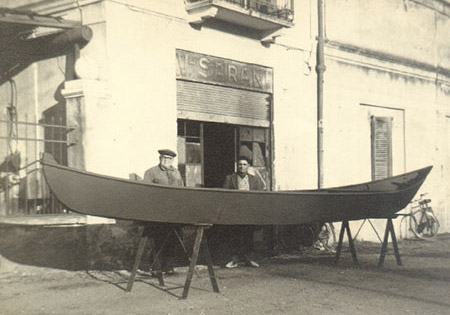 Costruzioni Navali is a joint stock company that builds boats exported throughout the world. A modern company that combines the advantages of a large industry without, however, to have lost the original inspiration of a family business. These are the main stages of its history:

1922, Pavia - Vincenzo Sarani, known in the city for the construction of numerous works on wrought iron, which still today embellish the historical buildings of the center, begins production of the boats in iron. In a few years, this will become the main work activity.

1948, Pavia - A slipway is built on Ticino river to launch the first ships designated to the river excavating activities.

1969, Travacò Siccomario (Pavia) - Open house of the first operational headquarters on the river Po, consisting of warehouses, offices and a slipway.

The first boat launched on Ticino, 1948

1977, Travacò Siccomario (Pavia) - Expanded the sheds, which arrive to cover a surface of 6000 m² and include in its interior a modern mechanical workshop. In the same year, a new launching slipway is built on the banks of the river Po.

1978, Travacò Siccomario (Pavia) - A new hydraulic propulsion system gets patented; it is installed on hundreds of boats for sea or inland waterway, in Italy and abroad.

1994, Cremona - Costruzioni Navali acquires a second production unit, with warehouses and dry dock, located within the port of Cremona.

2001, Cremona - The yard, following the acquisition of 2 new sheds and uncovered adjacent areas, covers a surface of 25,000 m². 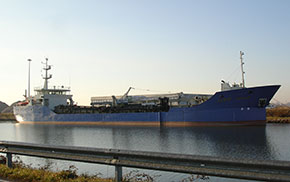 2002, Cremona - Begins the construction of the largest ship ever built in Lombardy: motor dredge Jarif , intended for the Libyan market.

Today - After almost a century, Costruzioni Navali continues its activities pursuing its philosophy: the listening to the Customer and his needs is the first step to search for the most appropriate solutions, perfectly configured to his specifications.